The impact of belief on perception. 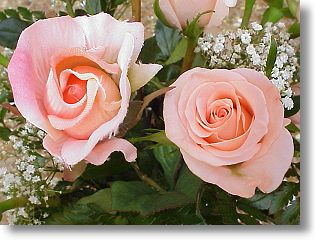 If I were to show you a silk rose, you would undoubtedly conclude that it was a product of intelligence and design, right?

Now suppose I show you a real rose, one with all the same characteristics of the silk rose, but with all the incredible added systems and technologies that we describe as “life.”

If you can conclude that the silk rose is a product of intelligence and design while the real rose is not, please stop for a moment and ask yourself, “How and why did I come to that conclusion?”

Yes, for just this moment, step back from ALL your preconceptions about life, dig deep into the core of your being and ask yourself, “HOW and WHY did I come to that conclusion?”

I think you’ll find that the answer isn’t in the characteristics of the rose itself, but rather in your ability, or willingness, to recognize and acknowledge the designer.

Let’s take this a step further. Suppose with advances in genetic engineering that we are one day able to produce a real living flower, identical to the one found in nature, from nothing but the raw elements of hydrogen, carbon, oxygen, etc. Would you still then declare this manufactured flower to be a product of man’s incredible intelligence and nature’s flower to be the product of chance?

The answer, again, is not found in the object itself but in your underlying beliefs about the designer.

If your beliefs about God influence your objectivity and consistency in judging design and intelligence in the world around you, seeing silk flowers as designed but real flowers as not, then the only way to achieve objectivity and consistency is to set aside ALL of the preconceptions and teachings that influence your mental processes of perception and evaluation. I know from experience that admitting how little we really “know” is incredibly humbling, but it is the first step to gaining knowledge that our current belief systems keep us from seeing.

In my experience, once you accept that God could be our creator, and seek to grow in that understanding rather than to reject it or rationalize it away, your eyes will be opened to all kinds of evidence of design and the Designer, evidence that you would readily accept in any other pursuit.

All it really takes is a single experience that gives you a personal awareness, understanding and appreciation of your Creator. Are you open to that experience?  Have you sought that experience?  It takes you beyond the theories and arguments over the evidence for intelligent design, but why debate whether there’s evidence of design when you may be able to meet the Designer Himself, and to know first hand the touch of His presence in your life?

“There is a principle which is a bar against all information, which is proof against all arguments and which cannot fail to keep a man in everlasting ignorance – that principle is contempt prior to investigation.”
Herbert Spencer

“In the beginning God created the heavens and the earth.”
Genesis 1:1

A non-believer is someone whose life hasn’t yet been touched by God.
Author unknown

For although they knew God, they neither glorified him as God nor gave thanks to him, but their thinking became futile and their foolish hearts were darkened. Although they claimed to be wise, they became fools.
(Romans 1:21-22)

“I am the way and the truth and the life. No one comes to the Father except through me. If you really knew me, you would know my Father as well. From now on, you do know him and have seen him.”
Word of Jesus Christ in John 14:6-7