Try seeing it from God’s view. 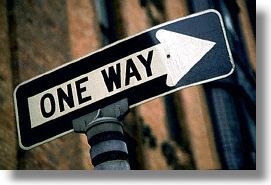 I used to be put off by Christians saying that Christ is the only way to God.  It seemed so narrow-minded to me.  What I later learned though is that this isn’t something Christians say out pride or close-mindedness.  This is simply what Jesus Christ said about himself.  The same Jesus who changed the world, and my life, with words such as “do to others what you would have them do to you” and “love your enemies” also said “I am the way and the truth and the life. No one comes to the Father except through me.”

Once I came to know God through Christ, to understand his truth and to experience his love, I found no reason to think that Christ is not the way to God and no reason to trust my life to some of his words while rejecting others.  For those of other religions, however, or those who do not believe in God at all, I know that Christian beliefs seem totally inconsistent with their own beliefs and even with logic.  How could there be only one way to God?

What seems to be an irreconcilable conflict on the surface, however, has  consistency, if we understand it from God’s view rather than our own.  God talks to mankind in many ways.  He responds to us individually in prayer.  He directs the course of human history, speaking to mankind on a grander scale through prophets such as Arjuna, Confucius, Buddha, Moses, Isaiah and Mohammed.

The words given to the prophets are still God’s words to mankind, but one time in history we have a record of God not just speaking through men and women, but actually coming to be with us in Jesus Christ.  This event was foretold by prophets centuries before it happened and proven by the many miracles He performed and the countless lives changed since.  If in human form He in essence says to us, “Look!  It’s me, God in your presence!  The same one who spoke to you through the prophets” and tells us that we can only get to Him through Him, we find a message that should make sense to all mankind:  We can only know our God through His act of making Himself known to us and through the way He offers to us,

not through our rituals, doctrines, sacrifices, magic crystals, idols, etc.  If Jesus Christ is none other than God incarnate, then He is quite right in saying that He is the only way to God.  How could there be any other way?  And while man’s religions teach complex doctrines and practices, He teaches that all that is required of any of us is faith in Him, offering all we know of ourselves to all we know of Him in a relationship of love.

Investigate the lives of these prophets and you’ll find they were ordinary men who sought something greater, had a mountaintop experience and returned with rules on how to live, such as the Ten Commandments and laws of Moses or the Noble Eightfold Path of Buddha.  Christ alone claimed oneness with God with authority, to be the Messiah and said “I am the truth, the way, the light of life, the bread of life, the resurrection and the life.”  He alone drew people to himself in a personal relationship to have life, then and now, rather than just pointing them to his teachings.  And while all the others prophets died a normal death, Christ alone was resurrected and reappeared to his followers.

If we don’t recognize and accept God when He appears before us, have we really come to know Him through the words He gave to His prophets we follow?  If we reject Him when He comes to us in person, yet claim to worship Him through our own individualized religious beliefs and practices, do we really know the God we worship?  From God’s view, is it Christ’s followers who are being prideful and closed-minded or is it those who choose their own ways over His way?  It’s not about a single organized religion being the only way, for organized religion isn’t the way to God.  The same God who revealed himself in Christ revealed himself to Abraham, from whom Judaism and Islam both came forth.  He reveals Himself to us on a personal level.  No matter what religion you are a part of, the only thing that makes it meaningful is getting past the religion ABOUT God and on to a relationship WITH God that changes the way you view and live your life, following His will rather than your own ego.

God gives us choice out of love, because our love for Him must be given freely to Him by our own choice.  Christianity in its simplest, purest and truest form isn’t a religion at all, but a personal relationship with God through Christ, making Him Lord of your life.  The key is thus accepting God when we experience Him and wanting more than anything to have a personal relationship with Him.

The key is knowing, understanding and loving Him for who He is rather than clinging to the beliefs we hold about who we think He should be and how we think we should get to Him.  Submitting our will to His is the gateway to worship and love.  Putting our will before His is the road of pride that takes us to a spiritual dead-end.  Our God undoubtedly touches the hearts and lives of those who turn to Him without having them having first heard the message of Christ, but if He appeared to us in Christ and we then reject Him, what does it say of our understanding of who He is, and what does it say of our heart and our motives?  The way to God must be His way, not the ways invented by mankind.  What does your heart say is the way that God has most clearly and directly revealed Himself to us?

“In the past God spoke to our forefathers through the prophets at many times and in various ways, but in these last days he has spoken to us by his Son, whom he appointed heir of all things, and through whom he made the universe.”
Hebrews 1:1-2

“I am the bread of life. He who comes to me will never go hungry, and he who believes in me will never be thirsty.”
Words of Jesus Christ in John 6:35

“I am the light of the world. Whoever follows me will never walk in darkness, but will have the light of life.”
Words of Jesus Christ in John 8:12

“When you have lifted up the Son of Man, then you will know that I am the one I claim to be and that I do nothing on my own but speak just what the Father has taught me.”
Words of Jesus Christ in John 8:28

“While I am in the world, I am the light of the world.”
Words of Jesus Christ in John 9:5

“I am the way and the truth and the life. No one comes to the Father except through me. If you really knew me, you would know my Father as well. From now on, you do know him and have seen him.” Philip said, “Lord, show us the Father and that will be enough for us.” Jesus answered: “Don’t you know me, Philip, even after I have been among you such a long time? Anyone who has seen me has seen the Father. How can you say, ‘Show us the Father’? Don’t you believe that I am in the Father, and that the Father is in me? The words I say to you are not just my own. Rather, it is the Father, living in me, who is doing his work. Believe me when I say that I am in the Father and the Father is in me; or at least believe on the evidence of the miracles themselves.
Words of Jesus Christ in John 14:6-11

“These people honor me with their lips, but their hearts are far from me.  They worship me in vain; their teachings are but rules taught by men.  You have let go of the commands of God and are holding on to the traditions of men.”  And he said to them: “You have a fine way of setting aside the commands of God in order to observe your own traditions!”
Words of Jesus Christ in Mark 7:6-9

“You diligently study the Scriptures because you think that by them you possess eternal life. These are the Scriptures that testify about me, yet you refuse to come to me to have life.”
Words of Jesus Christ in John 5:39-40

“When pride comes, then comes disgrace, but with humility comes wisdom.”
Proverbs 11:2

“You have never heard his voice nor seen his form, nor does his word dwell in you, for you do not believe the one he sent. You diligently study the Scriptures because you think that by them you possess eternal life. These are the Scriptures that testify about me, yet you refuse to come to me to have life.”
Words of Jesus Christ in John 5:37-40

“If they do not listen to Moses and the Prophets, they will not be convinced even if someone rises from the dead.”
Words of Jesus Christ in Luke 16:31

“If God were your Father, you would love me, for I came from God and now am here. I have not come on my own; but he sent me.”
Words of Jesus Christ in John 8:42

And what does the LORD require of you? To act justly and to love mercy and to walk humbly with your God.
Micah 6:8

Then they asked him, “What must we do to do the works God requires?” Jesus answered, “The work of God is this: to believe in the one he has sent.”
Words of Jesus Christ in John 6:28-29