You are here: Home / 1) Knowing God is there / Mind Over Matter

The role of matter and intelligence in life. 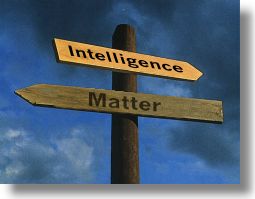 We have a simple, but interesting, choice to make in deciding where we came from. We can never know for certain how life began, for no human was there to observe it happening. Reason can be used to support any belief about our origins, so, without hard evidence, whatever we choose to believe will ultimately be based in faith. We thus place our faith in one of two simple choices.  Either the universe was created, an act of purpose and design which would require incredible intelligence and power, or it happened on its own as a natural phenomenon, meaning we are all here by chance. The foundation of our faith really reduces down to this simple choice:

So how do we solve this puzzle? Science and reason are based on observation of evidence and logical inference. What do we observe? That life comes only from existing life and not from inanimate matter. What do we logically infer? If the odds of life forming on its own are even as low as one in a trillion, then the odds of life not forming on its own must be a trillion to one. Wouldn’t these observations and inferences lead anyone acting without bias or preconceptions about God and religion to conclude that intelligent design is far more reasonable than life happening on its own?

Everything that we know with certainty to have been created in our own lifetime was only done so with purpose and intelligence. We’ve never observed non-living matter to have either intelligence or the ability to create life, so how and why would matter have created it to begin with? An intelligence and power capable of creating the universe is far beyond our comprehension, yet it shouldn’t be difficult to see that this is the more reasonable choice of faith. It’s just putting mind over matter.

“In the beginning God created the heavens and the earth.”
Genesis 1:1

“The Spirit gives life; the flesh counts for nothing. The words I have spoken to you are spirit and they are life.  Yet there are some of you who do not believe.”
Words of Jesus Christ, John 6:63-64″