You are here: Home / 1) Knowing God is there / Not a shred of evidence for God

Have you been to the places where God can be found? 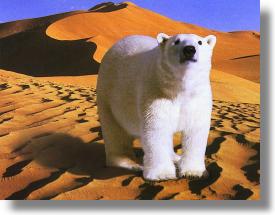 If you live in a desert and never leave it, you won’t find a shred of evidence for the existence for polar ice caps or polar bears.  If you live a world apart from God and never venture beyond it, you won’t find a shred of evidence for God.  As the author of a website that offers evidences of Divine design and challenges chance and evolution as the sole explanation for the origin of life, I’ve received letters taking positions across the entire spectrum of belief on this issue.  As a former agnostic, I can understand positions taken against creation, and now, as a believer, I can understand positions taken against evolution.  What I can’t understand are those who write to tell me that “there isn’t a shred of evidence for God.”  This exact phrase has appeared in a number of letters, so I suspect it comes from some well-regarded source of atheistic writing, but it would seem that any rational person with an open mind would have to concede that there are in fact many evidences for God:

Reason and observation of the universe, life and mankind

Veracity of Scripture in prophecy, history and scientific information

These are at least evidences of God, are they not?  Are these “proofs” of God?  You won’t really know until you explore them for yourself, but, for those who take pride in their intelligence, the thought of a vastly superior Intelligence can become an unthinkable barrier to this pursuit.  One thing that is certain though is that just as you won’t find a shred of evidence for polar ice caps and polar bears in the desert, you won’t find evidence for God unless you are willing to go to where He is found.

“There is a principle which is a bar against all information, which is proof against all arguments and which cannot fail to keep a man in everlasting ignorance – that principle is contempt prior to investigation.”
Herbert Spencer

“Dogma: A principle, belief, or statement of idea or opinion, especially one formally or authoritatively considered to be absolute truth.”
The American Heritage Dictionary, New College Edition
(Note:  Dogma can thus be not only religious, but also scientific, social, political, etc.)

Do not deceive yourselves. If any one of you thinks he is wise by the standards of this age, he should become a “fool” so that he may become wise.  For the wisdom of this world is foolishness in God’s sight.
(1 Corinthians 3:18-19)

For although they knew God, they neither glorified him as God nor gave thanks to him, but their thinking became futile and their foolish hearts were darkened. Although they claimed to be wise, they became fools. (Romans 1:21-22)

“This is why I speak to them in parables: “Though seeing, they do not see; though hearing, they do not hear or understand. In them is fulfilled the prophecy of Isaiah: “‘You will be ever hearing but never understanding; you will be ever seeing but never perceiving. For this people’s heart has become calloused; they hardly hear with their ears, and they have closed their eyes. Otherwise they might see with their eyes, hear with their ears, understand with their hearts and turn, and I would heal them.’ But blessed are your eyes because they see, and your ears because they hear.”
Word of Jesus Christ in Matthew 13:13-16