You are here: Home / 2) God is not a religion / Religion is just like hockey!

No points are given for fighting.

Have you ever been to a hockey game? Many people don’t like hockey because they just don’t understand it. You hear whistles being blown and play stopping for no apparent reason. You see people coming in and out of large boxes (the player’s benches) and small boxes (the penalty boxes) with no apparent logic. You see people pushing each other and hitting each other with sticks. You might even see gloves being thrown on the ice and grown men striking each other until blood is drawn. With all the confusion, it may not even be clear that the only real goal is to get the little black thing in the net.  In watching that one game, you might very well conclude that hockey is irrational and barbaric, and want nothing to do with it.  You might not notice any real difference between a rookie and Wayne Gretsky, the best in the game.

I think that our understanding of God and religion can be much the same. You can take a distant, cursory view from the outside, observe the fighting, find all the rules confusing and conclude that there is nothing there of much sense or value. This is where the agnostics and atheists sit. You can learn enough so that it at least makes enough sense for you to get a little something out of it. This is religion for the masses. You can use it as an outlet for the hate and anger inside of you.  This is religion for the self-righteous.  You can put on a jersey, go down on the ice and try to learn a little from all the players. This is spirituality. 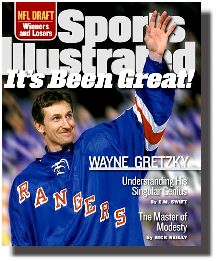 But suppose you were to get one on one with Wayne Gretsky, a living legend, and ask him to teach you everything he knows about the game, commit to integrating his words, his maneuvers and his wisdom into the very fabric of the way you play the game, and continually seek his help in coming as close as you can to achieving the high standard he set for the game. This is how Christianity works in its true form, but it’s Jesus Christ, the living Savior, you follow, and it’s not just a game being played, but the way you live your life.

So what’s the goal then? Not to get a puck inside a net, but to get your will inside of God’s will, to let Him put His spirit inside of you. That’s how you learn His higher standard for life that allows you to grow in your capacity to love, to put other’s needs ahead of your self-centered wants, to find something to praise rather than to criticize, to forgive rather than to condemn and to continually seek a greater source of wisdom than your own. 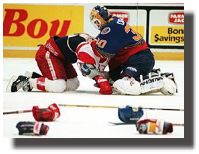 Nothing that is done with anger, judgment or self-righteousness is truly being done in the name of God, no matter what those doing it may say.  Learn Christ’s ways and all those doing stupid things in the name of their religion will seem no closer to God than the guys with their gloves on their ice seem to the game of hockey.  That’s just not what it’s about.

“Isaiah was right when he prophesied about you hypocrites; as it is written: “‘These people honor me with their lips, but their hearts are far from me. They worship me in vain; their teachings are but rules taught by men.”
Words of Jesus Christ in Mark 7:6-7