You are here: Home / 1) Knowing God is there / Seeing God in a bubble chamber

The unseen force behind faith. 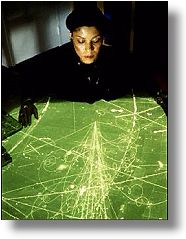 In the laboratory, scientists readily accept trails in a bubble chamber as clear and undeniable evidence of particles and the forces that change their direction, even though they can see neither the particles nor the forces.

Some people claim there is no evidence of God, but what is the unseen force that changes the direction of a life and turns it to one of faith?  Certainly there are many people who believe in God just because they were brought up in a family or culture that believes in God.  But how do we explain the non-believer with no religious upbringing who can point to a specific day on which the direction of his life was changed in a way that he can only attribute to God?  Should this evidence be any less convincing than the unseen forces at work in a bubble chamber?

Many people “believe” in God, but to believe in possibilities is not true faith, just a philosophy.  Belief is a truth held in the mind, but faith goes beyond that to change the course of lives and even human history.  And in faith, we find people throughout history drawn beyond the pull of reason and simple belief to an unseen force, as clearly as iron is drawn by magnetism and matter is drawn by gravity.  Faith itself is thus an incredible evidence of God, for there is no real reason for it to exist without Him.

If you could see your life from above, would its path be straight and unaffected by God, or would it have passed close enough to God to have been completely turned around by the experience?

“My message and my preaching were not with wise and persuasive words, but with a demonstration of the Spirit’s power, so that your faith might not rest on men’s wisdom, but on God’s power.”
1 Corinthians 2:4-5

“For it is by grace you have been saved, through faith–and this not from yourselves, it is the gift of God– not by works, so that no one can boast.”
Ephesians 2:8-9