You are here: Home / Other thoughts / Some expert advice on love 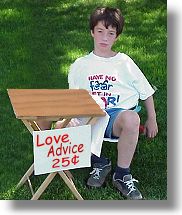 At the age of nine, most boys know just enough about girls to know that they don’t like them and want nothing more to do with them.  The idea of getting advice on love from someone who has never experienced love and yet is strongly opposed to it seems pretty ridiculous, doesn’t it?  What real insights could this young man possibly have?  A man needs years of experience to even begin to know something about women, and you wouldn’t want advice from just any man on the subject, but only those who had been successful in their relationships, right?

Curiously, the most outspoken opponents of God are those who have never experienced Him in their lives and yet are strongly opposed to the notion that He even exists.  There’s a subtle irony in putting your energies into opposing someone who you say you don’t believe to exist.  Even so, with no experience with God and a strong bias against Him, what real insights can such people possibly have?

This isn’t to say that those who claim that God doesn’t exist aren’t highly intelligent, well-educated and even extremely rational people.  It just says that without the experience that brings one to faith in God, their statements are really nothing more than ungrounded opinions.  Often they strike out against religion as an institution rather than God as a person, because they do not yet know God as a person.  If they did, they would know that He, as revealed in the words of Jesus Christ, is more opposed to religious hypocrisy and self-righteousness than are they, and in that knowledge they might begin to come to know Him.

A non-believer is someone whose life hasn’t yet been touched by God.
Author unknown

The man without the Spirit does not accept the things that come from the Spirit of God, for they are foolishness to him, and he cannot understand them, because they are spiritually discerned.
1 Corinthians 2:14

“Isaiah was right when he prophesied about you (religious) hypocrites; as it is written: ‘These people honor me with their lips, but their hearts are far from me. They worship me in vain; their teachings are but rules taught by men.’ You have let go of the commands of God and are holding on to the traditions of men.”
Words of Jesus Christ in Mark 7:6-8

For since the creation of the world God’s invisible qualities–his eternal power and divine nature–have been clearly seen, being understood from what has been made, so that men are without excuse.  For although they knew God, they neither glorified him as God nor gave thanks to him, but their thinking became futile and their foolish hearts were darkened.  Although they claimed to be wise, they became fools.
Romans 1:20-22

One with an experience should never be subjugated to one with an opinion.
Author unknown