You are here: Home / 5) God changes us / The homeless rich man

It’s not yours unless you believe it’s yours.

A child was born to a very rich king, but they were separated shortly after the child’s birth.  The king greatly loved all his children and wanted this son to share in his life and wealth.  He left messages throughout the entire kingdom to tell him that he was loved and was an heir to great wealth.  Many people saw the messages and told the son of his great wealth, but the son lived homeless and in absolute poverty.  Why?  Simply because he never believed the message.  It seemed illogical to him, too good to be true.  Tragic, isn’t it?  You could be the heir to a kingdom of phenomenal wealth, but if you refused to believe it to be true, no matter what others told you, you would live your life in a state of poverty, never knowing who you really were, never tasting the riches intended for you, never knowing the life that you could have lived and never knowing the love of your father. 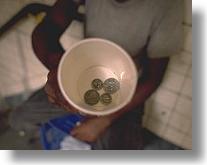 The real tragedy is that many people live in spiritual poverty, homeless in their spiritual existence, simply due to a lack of belief.  Our Heavenly Father loves us beyond human comprehension and wants us to know the great richness of life the way He intended it for us, but until we believe this simple message we cannot receive the least of what God wants to give us.  I was one of those with no spiritual life, but as soon as I believed in His blessings I received His blessings.  His message of love and care is all around us; the Bible found in a hotel nightstand, the church on the corner, the quiet voice of conscience in our souls and even the magnificence of nature.  Still, if we refuse to hear and believe His message, we live in the poverty of our brief physical existence and never know the reality or meaning of a wisdom beyond our own, a love beyond our comprehension and a life that never ends.

For God so loved the world that he gave his one and only Son, that whoever believes in him shall not perish but have eternal life.
John 3:16

I have spoken to you of earthly things and you do not believe; how then will you believe if I speak of heavenly things?
John 3:12

Therefore I tell you, whatever you ask for in prayer, believe that you have received it, and it will be yours.
Mark 11:24