You are here: Home / 4) God reveals Himself / The missing link

Shouldn’t we seek the missing link to higher life forms too? 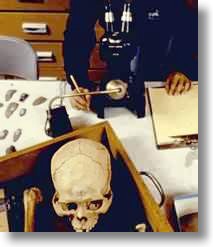 Since Darwin first advanced the theory of evolution, mankind has striven to connect itself to lower, more primitive life forms. We seek the missing link between man and ape, and then between single-celled life and non-living matter.  As our focus in this search has shifted thinking away from God, perhaps Darwin captured a subtle and prophetic double meaning when he entitled his book “The Descent of Man.”

To date, the links are still missing and the “discoveries” hailed in the news one week are soon overturned by new findings that require we rethink our theories.  This demonstrates that even scientists have the ability to jump to the conclusions they wish to support rather than to fully consider the evidence and the alternatives.  One “discovery,” Piltdown Man, was nothing more than a hoax that was accepted as scientific fact for forty years, demonstrating that motives can influence science.  It also demonstrates our willingness to believe anything that we wish to be true.

This search for the missing link is a gratifying quest in completing our scientific knowledge about the human race.  It is also gratifying in the boost it gives to our egos and intellectual pride, because it allows us to perceive ourselves as the most advanced and intelligent life form in the universe.  Even in our search for extra-terrestrial intelligence (SETI), our methods are biased towards finding only our intellectual equals, civilizations which would be communicating with the same technologies as our own.

What would happen though if we were to put the same faith and effort into seeking the missing link with a far more advanced life form than mankind?  What if we were to look beyond our pride to the horribly humbling realization that we may be little more than gnats on the grand scale of intellectual capacity?  Wouldn’t that lead us to ask different questions and seek different answers?

How would such an intelligence communicate with us?  Would it wait until our 20th century to send us radio waves from space or would it simply connect with our thoughts?  Could this explain accounts of “hearing voices?”  Could it be that prayer is more effective than radio telescopes in connecting with another intelligence?

Might not another intelligence just materialize or project itself in this dimension of time and space right before our eyes?  How can we watch the very same thing as a “special effect” in “Star Trek” and “Star Wars” and then assume that Gene Roddenberry and George Lucas must have been the first ones in the universe to think of it?  Could this explain accounts of visions of the beings that we call “angels” or “saints?”

To reach us on our own level, wouldn’t the best way to communicate just be to appear to us in human form, as in the movie “Star Man?”  Is this really any different in concept than the account of the Christ child, born of a virgin by the spirit of God?  If appearing in human form is the best means to communicate, could it be that Jesus Christ is the missing link that we should be pursuing in our efforts to connect to another intelligence?

In every era of civilization, mankind always seems so sure that the current understandings of the world are right.  In every era, mankind looks on past generations as being simple and backwards.  Are our current scientific pursuits any better, or do they simply offer another illustration of how arrogant and naive we can be as humans, and another lesson on how much we still have to learn if we really want to find the missing link?

“For decades scientists have worked to connect the dots between dozens of fossil discoveries in East and southern Africa in hopes of constructing an accurate picture of human origins. Now, a new find in western Central Africa suggests the picture may be radically different than widely assumed.”
Article entitled “Skull Fossil from Chad Forces Rethinking of Human Origins,” on National Geographic website, July 10, 2002

I am the way and the truth and the life. No one comes to the Father except through me. If you really knew me, you would know my Father as well.
Words of Jesus Christ in John 14:6-8

“When pride comes, then comes disgrace, but with humility comes wisdom.”
Proverbs 11:2