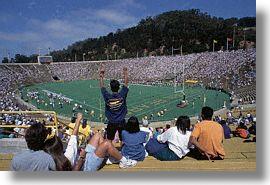 Fans at a football game found themselves perplexed by the seemingly random cheers of other fans at the game.  The home team was losing badly, yet in the middle of a huddle a number of people across the stadium jumped out of their seats and a let out a huge cheer.  Minutes later, during a time out, another cheer was heard across the stadium.  Who were these lunatics?  What the heck were they cheering about?  They seemed completely out of touch with reality and people began to feel uncomfortable being around them.

What the fans sitting in glum silence didn’t realize though was that only miles away, the city’s major league baseball team was making a stunning comeback and was about to lock in its place in the World Series.  The cheering fans weren’t lunatics at all.  They were all listening to the game on portable radios and responding in unison to the play-by-play broadcast.  They were simply tuned into something that the others couldn’t perceive and were participating in both games at once.

For years I thought that people who believed in God were not just out of their seats, but out of their minds.  Who the heck were they worshiping and praising?  They seemed so irrational and completely out of touch with reality, and frankly I felt quite uncomfortable around them.  What I’ve since discovered is that they were simply tuned into something that I wasn’t.  While I was only participating in the physical part of life’s existence, they were participating in both the physical and spiritual at once.

I’ve now turned to God as well, through prayer, worship and scripture, and know what it’s like to have my life touched by His presence, love and counsel.  I share in the praises of the believers, but I also remember what it’s like to be sitting in an uncomfortable spiritual silence.  It needn’t be that way though.  We’ve all been given the ability to hear the quiet voice that stirs within the soul, to know the insight that comes from an understanding beyond our own.  All we need to do is to tune in to a different frequency … and a Higher Power.

“Father, glorify your name!” Then a voice came from heaven, “I have glorified it, and will glorify it again.” The crowd that was there and heard it said it had thundered; others said an angel had spoken to him. Jesus said, “This voice was for your benefit, not mine.”
Words of Jesus Christ in John 12:28-30

“And I will ask the Father, and he will give you another Counselor to be with you forever–the Spirit of truth. The world cannot accept him, because it neither sees him nor knows him. But you know him, for he lives with you and will be in you.”
Words of Jesus Christ in John 14:16-17

“The Counselor, the Holy Spirit, whom the Father will send in my name, will teach you all things and will remind you of everything I have said to you.”
Words of Jesus Christ in John 14:26

“Don’t you know that you yourselves are God’s temple and that God’s Spirit lives in you?”
1 Corinthians 3:16