When in Rome, do as the Romans do. 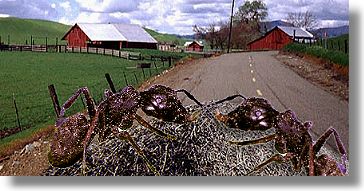 Suppose you saw a colony of ants building their hill in the middle of a road. They’d have no clue that what they were doing was putting them in grave danger. From your perspective, however, you could immediately assess the situation, see the danger and know the proper corrective action to assure their safety and well-being.

You could do all that in an instant, but now how could you possibly communicate that to them? If you approached them they’d fear you, a threatening gargantuan, even more than they would the imminent danger that they faced from impending traffic. If you picked them up and moved them they would only be confused and terrified, learn nothing of the error of their ways and resume what they had started as soon as you left them alone. How could you relate to them? How could you save them?

The only real way to help them would be to come to them as an ant yourself, a member of their own colony. Only then would you share a common language to use as a basis for communication. Only then could you even approach them without being regarded as a predatory threat or a tasty meal. Only then could you describe the problem they faced in terms that would make sense to them. As an ant, you wouldn’t have all your human capabilities, but your insight into ant life would undoubtedly be quite amazing to them.  Some would listen, heed your warning and seek a new life off the broad path of the pavement. Some would undoubtedly scoff at your description of things unknown to them; people, cars, and highways. Whether or not they listened, at least you would have done the best you could to save them while still preserving their freedom of choice.

God faces a similar dilemma in communicating with us. If He were to appear before us as the omnipotent and omniscient God, we would live in absolute terror. So what did he do? He came to us as one of our own, God in human form, as Jesus Christ. He imparted a higher wisdom to us on the right way to live and on the perils of straying from His commands to us and into the broad path of destruction. Out of love, He humbled and reduced Himself to our level so that He might teach and save us. Out of love, He leaves us to learn and make our own choices, and bear our own consequences, yet still whispers in a quiet voice of counsel to our souls, if we believe and are willing to listen.

Atheists, intellectuals and even some new age spiritualists alike reason that man may be the highest intelligence in the universe, though they have created neither the universe nor their own intelligence. In their pride they postulate that man has become a god, and blind themselves to even considering that God has become a man.

To the weak I became weak, to win the weak. I have become all things to all men so that by all possible means I might save some.
1 Corinthians 9:22

He may speak in their ears and terrify them with warnings, to turn man from wrongdoing and keep him from pride.
Job 33:16-17

For God did not send his Son into the world to condemn the world, but to save the world through him.
John 3:17