You are here: Home / 2) God is not a religion / What’s wrong with this picture?

Don’t be fooled by reflections. 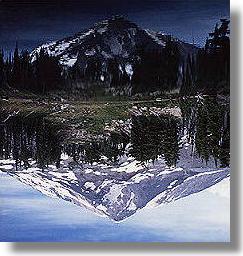 What’s wrong with this picture?  Can you see it?  It’s a reflection of a mountain in a lake, but the reflection is clearer than the original image.  That can’t be, can it?  What’s wrong is that the picture is upside-down.

There’s a similar problem with Christianity.  People look at Christians or the church, thinking they have a clear picture of what Christianity is all about.  That’s where they make their mistake and many turn away from Christ as a result, as did I.

But Jesus never said that the church was the way or even that Christianity was the way.  He simply said, “I am the way.”  Only by looking directly to Jesus Christ can one understand Christianity.  Even on the best days, Christians are just imperfect reflections of Jesus Christ, dark and distorted by comparison.  When the skies get dark and the water gets choppy, there may be no reflection at all.  If you wanted to appreciate the majesty of a mountain by a lake, would you look at the mountain, or look at its reflection in the water?  Similarly, if you wanted to know Michelangelo, would you seek him and study his works or would you study the works of students who were inspired by his greatness?

As with the mountain, looking at reflections inspired by Jesus will only give you a confusing set of changing images that each will have only a slight resemblance to the original. As with Michelangelo, each student will only reflect some small facet of the master, which, when blended with their own limitations, obscures the master’s greatness.  Imagine others trying to judge you by studying those you work or associate with.  Would they really know you, or would they just get a set of conflicting impressions that only reflected a very small part of who you really are?

Don’t settle for a distorted, upside-down view of Christianity.  Go get the clear picture that is found only in the words spoken by Christ himself.  You’ll find them in the gospels of Matthew, Mark, Luke and John.  You might be amazed at how much clearer your picture of God becomes.

“I am the way and the truth and the life. No one comes to the Father except through me.  If you really knew me, you would know my Father as well.
Words of Jesus Christ, in John 14:6-7