You are here: Home / 1) Knowing God is there / When two people see different things

The impact of perception on belief. 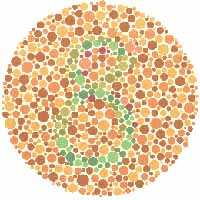 Most people who look at the image to the left see a green number “8” inside a group of reddish-orange dots.  But about 5% of the population, mostly male, see just dots and no number at all.  How can that be?  It results from a condition called color-blindness in which the red receptors of the retina do not discern light in the same way as they do in other people.  For people with color-blindness, stating that there is no “8” is a completely true statement to them, yet 95% of the population would state with equal confidence that they are wrong.  Both views are based on personal experience, yet they yield conflicting answers.  Whose answer contains the higher truth, the one who has experienced nothing or the one who has experienced something?

My father has color-blindness, but I was fortunate to not inherit this condition.  At one point in my life, however, I came to realize that I suffered from another condition, best described as spiritual blindness.  Most people have experienced the presence of God in their lives.  But a small part of the population, mostly male, often highly intelligent and well educated, sees the universe as entirely physical and sees nothing at all within it that is spiritual.  Both views are based on personal experience, but I found that there was a higher truth than my own.

There’s no known cure for any blindness but one:  A miracle that comes from the touch of God.  When Jesus walked the Earth, He gave sight to the physically blind, but His primary mission was to give sight to the spiritually blind.  And just as the man who was blind since birth proclaimed after an encounter with Jesus, “I was blind but now I see!,” those who turn to Jesus today find their spiritual blindness removed, allowing them to see God where once they saw nothing.  It’s comforting to associate with people who see only the things you see, but how will you ever know if there is really something more to be seen, be it green where there appears to be only red, light where there appears to be only darkness, or your God and Creator where there appears to be no intelligence greater than your own?

You say, ‘I am rich; I have acquired wealth and do not need a thing.’ But you do not realize that you are wretched, pitiful, poor, blind and naked.
Words of Jesus Christ in Revelation 3:17

The Spirit gives life; the flesh counts for nothing. The words I have spoken to you are spirit and they are life. Yet there are some of you who do not believe.
Words of Jesus Christ in John 6:63-65

The man without the Spirit does not accept the things that come from the Spirit of God, for they are foolishness to him, and he cannot understand them, because they are spiritually discerned.
1 Corinthians 2:14

Can a blind man lead a blind man? Will they not both fall into a pit?
Words of Jesus Christ in Luke 6:39

I am the light of the world.
Whoever follows me will never walk in darkness, but will have the light of life.
Words of Jesus Christ in John 8:12